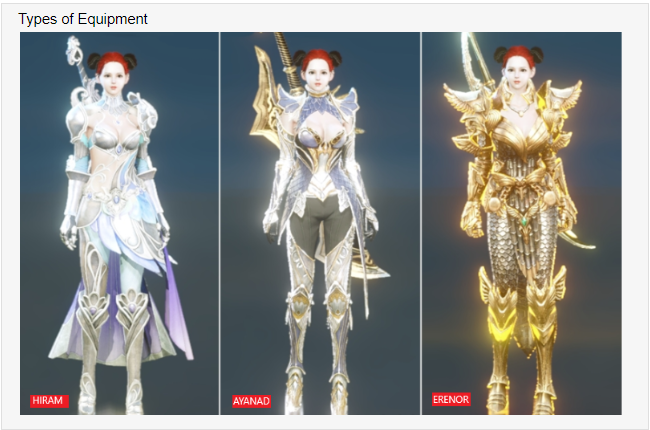 The three most frequently used equipment by players are Hiram, Ayanad, and Erenor equipment.

• Hiram Guardian equipment: Acquired by quests and field hunts in the Auroria Continent. It is a standard equipment that can be quickly and efficiently upgraded by supplying and receiving materials for equipment growth.
• Ayanad Equipment: You can defeat and acquire the boss of the Ayanad Library, and you need to receive growth materials in the instance dungeon. It is difficult to grow due to limited admission three times a day.
• Erenor Equipment: It is a production equipment that can be traded with other users. The equipment has the best performance, but it is the equipment with the highest growth difficulty because supply and demand of growth materials is very difficult.
How to get and the difficulty level of upgrading from the equipment type 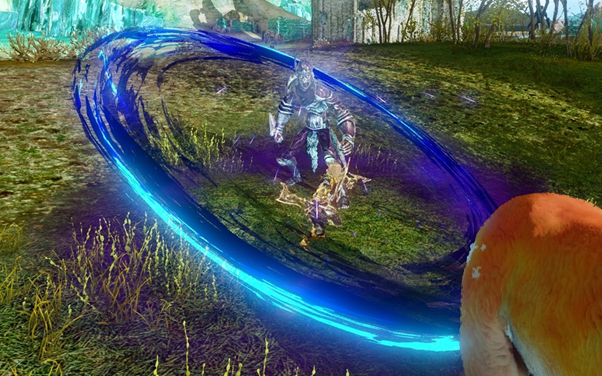 If you are just starting ArcheAge, you can quickly increase your equipment points using Hiram equipment that can be easily acquired early in the game. The very first weapon you receive will level up with you and become a Hiram weapon. Once you have a point of about 7,000 gear, you will be able to access most of the ArcheAge content.
The set effect is added to every 3, 5, and 7 sets of the library, but it requires a lot of gold coins to grow, and it is recommended to choose according to your preference, as the damage reduction options such as crit resistance and interpersonal damage resistance are vulnerable.
If you want to enjoy the game without the stress of equipment growth, there is also a way to collect gold coins by trade and trade, and buy the best equipment, erenor equipment, at the auction house.
Weapon and Armor Selection Guide
ArcheAge has a variety of weapons, including swords, bows, wands, and musical instruments. The armor is made of three materials: cloth, leather, and sheet metal. Weapons have different attack speeds and additional damage depending on the type, and it is important to choose a weapon and armor suitable for the play style because armor can selectively reduce physical or magic damage depending on the material.
Weapon Selection Guide

Instrument
Wind instrument, String instrument
• You can restore health or magic by playing a musical instrument, and it is used for skill of romantic ability.
Armor Selection Guide

Cloth Armor
Armor specialized in magical armor that reduces the damage of magical attacks.
• It is advantageous for sustaining magic and magic attacks, but is vulnerable to physical damage.
Leather armor
A mixed armor that moderately reduces physical and magical attack damage.
• Has a medium performance between Cloth Armor and Plate Armor.

Plate Armor
Armor specialized in physical defense that reduces the damage of physical attacks.
• It is advantageous for sustaining fighting and physical attacks, but is vulnerable to magical damage.
Synthesis effect of recommending ancient equipment according to role
Tanker 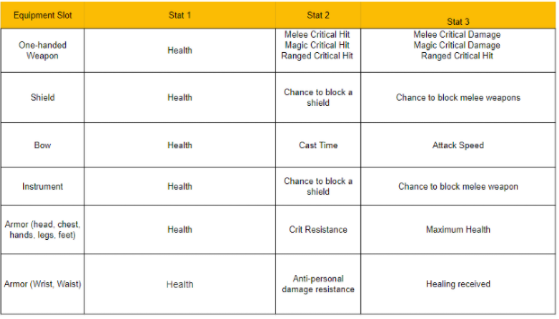 In the case of tankers, many people wear a Burning Pledge instead of Hiram equipment as their main weapon.
Melee 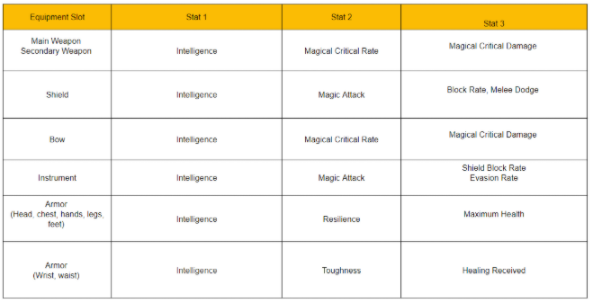 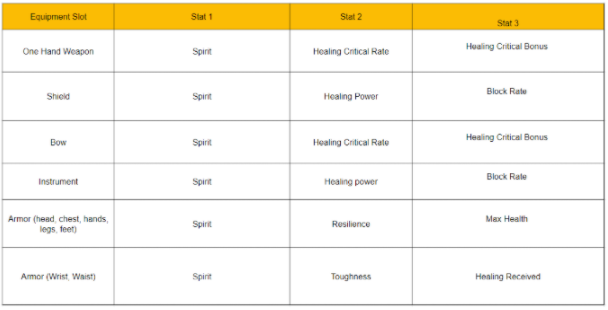 • Many healers gain health by increasing their stamina instead of their spirit, so please choose according to your preference.
Upgrade Hiram Equipment

As mentioned above, Hiram is not only easy to acquire and grow, but also has excellent performance, making it a good value for gold equipment. Hiram equipment is able to use Infusions and awakening scrolls to grow.
'Infusion' is used to increase the rank of the equipment (experience) through item compositing , and 'Awakening’ is used to tier up the equipment to the next level through the item awakening . Synthesize faint ancient equipment to artifact level, and if you awaken successfully, you will grow into a new tier.
Item Synthesis 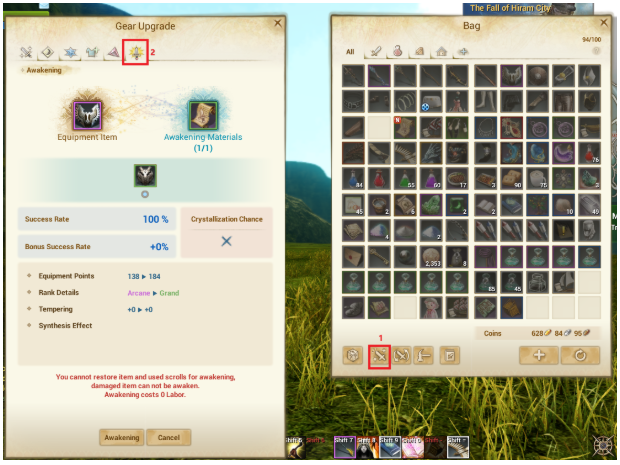 Ancient equipment that has grown to the maximum level through item synthesis can be upgraded to the next tier using the Ancient Awakening Scroll. You can awaken by right-clicking on the awakening scroll item in the bag, or registering the equipment item and awakening material in the [Awakening] tab of the item growth window. Unlike in synthesys, there is a chance of failure, and in the worst case, the item may be damaged.

• Awakening of the item requires 300 labor, and the number of awakening scrolls required varies depending on the equipment type or awakening stage.
• The default success rate of item awakening is 10%, and each success rate increases the additional success rate by 5%.
• Damaged items cannot be awakened, and can be re-awakened by repairing damaged equipment using the Damage Repair Certificate.
>Damaged items can be worn in a damaged state, and no penalty is given for use.
Ancient Awakening Scroll
Ancient Awakening Scroll: Level 1 is used to awaken Ancient Equipment, and can be obtained by killing monsters in the Continental Territory or performing daily quests. With Item Synthesis, you can change the effect given to ancient equipment by earning 1 replacement number of effects each time the equipment rank goes up. Click the [Item Growth] button at the bottom of the bag and press ‘Replace Effect' in the pop-up window to replace the item effect. By default, you are given an opportunity to replace the effect as many times as there are remaining effects, and if you use up all of the effect replacement, you can replace it with a mysterious lucky stone. If you click the magnifying glass button to the right of the effect, you can check the effect information that can be obtained.

• You can have up to 5 effects replacements.
• The same two effects cannot be applied simultaneously.
• If there are both replacement counts and material items, the material item is used first.
• When you replace an effect, you can see which effect will change and decide whether or not to apply it.

Equipment Effect Settings
In general, if 1-2 of the 3 effects are the desired effect, upgrade the equipment and set the equipment effect using the item effect replacement. We recommend that you refer to the recommended stats listed above or the settings of the top rankers because the types of effects given to each part, such as weapons, armor, and jewelry, are different.
EX) When a user who wants to play a melee sets the main weapon
• The main effects used in a Melee's main weapon are Strength, Melee Critical Hit, and Melee Critical Damage.
• If the effect of the acquired weapon matches at least 1 of the 3 above, the rank is increased through synthesis to obtain the number of effect replacements.
• Try changing the effect of the item and repeat until the unnecessary effect is given as the desired effect.
Bound Serendipity Stone
If the item has grown to some extent and fails to achieve the desired effect with the remaining number of effect replacements, you can use the Bound Serendipity Stone as a material to replace the item effect. Bound Serendipity Stones can be purchased for Honor Points, purchased from Marketplace, Auction Houses, or from Events.
Item Refining 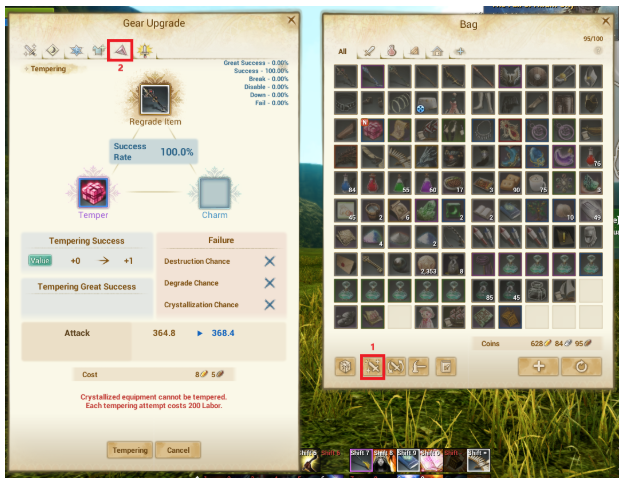 Refining refers to strengthening a weapon's attack power and armor's physical and magical defenses, that is, equipment's basic performance. It is similar to the strengthening system of other games with +1 and +2 in front of the item name. Solar Temper is used for weapon refining and Lunar Temper for armor refining. You can right-click on it or refine in the [Item Growth]> Refining tab at the bottom of the bag.
List
1 2 ... NEXT