What is Faction Honor Battlefield? 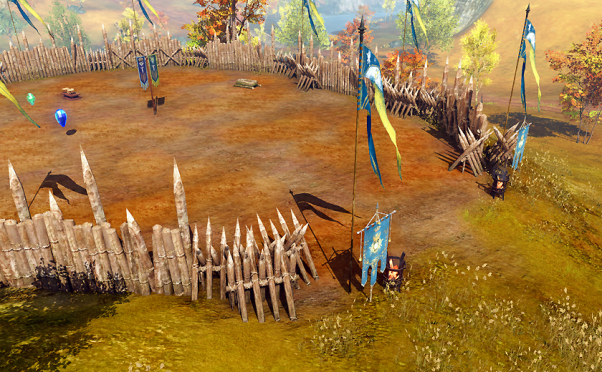 ● Faction Honor Battlefield is an instance where Nuian, Haranyan, and Pirates compete each other to destroy the opponent’s faction base.
● Upon entering the instance, the arena takes place in either Halcyona or Skyfin Nest.
● Join the battle as a combatant or a craftsman with professional skills to destroy the enemy faction and lead your faction to victory. 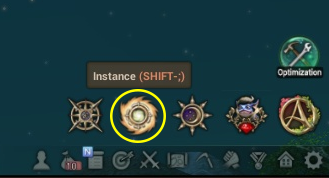 ● Anyone can apply for admission through the instance menu at the bottom right of the game screen (shortcut: Shift + ; ) when available.
● Faction Honor Battlefield is available from 01:30 to 02:00, 14:30 to 15:15, and 20:30 to 21:15 UTC+8.
● Players awaiting a trial, participating in a trial, Prisoners or carrying a trade pack are not allowed to join the instance.
● +8,000 Equipment Points and Lv 50+ are required to join the instance.
● You can enter the instance even if you reach a daily entry limit (3 times per day).
● You will not earn any rewards when a daily limit is reached but the result will still be reflected on the ranking.
Team Composition 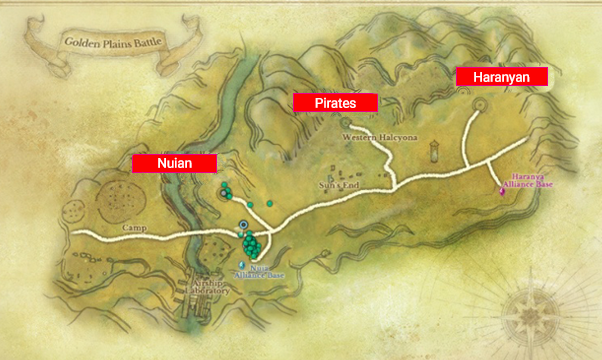 ● Nuia and Haranya Faction have their faction bases to defend.
● The Relic to be protected, Auto-Cannon protecting the Relic, and Guardian NPCs can be found in the faction base.
● Pirates have no base and their resurrection zone is located between Haranya and Nuia’s faction bases.
● NPCs will not be respawned once killed.
● Each base has a flag pole that only the players from other factions can interact with.
○ A successful interaction will remove 3 allied automatic cannons.
○ The interaction requires 50,000 Handcraft Proficiency.
● The instance lasts for 20 minutes 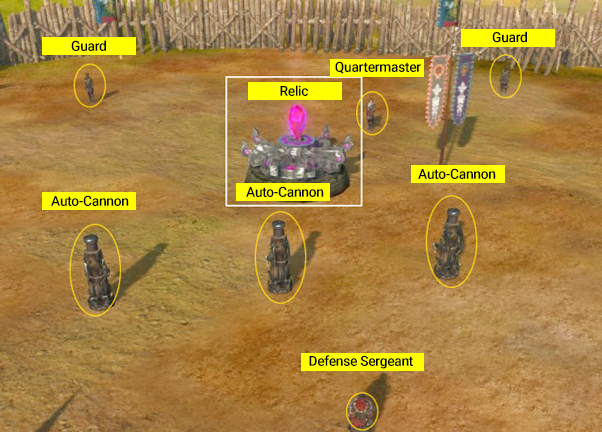 ● There are turrets and guardian NPCs around the relic.
○ The Relics take 85% less damage for the first 10 minutes.
○ NPC will not be respawned once killed.
○ Each base has a flag pole that only the players from other factions can interact.
○ A successful interaction will remove 3 allied automatic cannons.The interaction requires 50,000 Handcraft Proficiency.
Victory Conditions
● Destroy the enemy faction’s relic or hold the most kill points when the instance ends after 20 minutes.
● If the both Relics are not destroyed when the instance ends, the faction with the highest kill points wins.
○ If the counts are event, the faction with the highest progress points wins.
○ The match will be a draw if the kills and the progress points of the both factions are even.
Banned Items and Skills
● Use of some items including the Teleport Book are restricted.
● Mounts, battle pets, gliders, tanks, and vehicles are restricted.
Battlefield Progress
Battle Begins
● The battle begins in 10 seconds after the queuing phase.
● The oversized bubbles in each faction base are removed once the waiting phase ends.
Tracking Progress 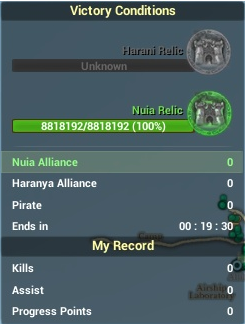 ● You can check your record, the status of victory conditions, and brief scores of each faction during the battle.
Death/Respawn
● Death will not trigger the exp/ durability penalties.
● Your character will be resurrected in each faction's respawn area in 15 seconds from death.
● The effect of Goddess Nui's does not apply.
●  Use of the Escape skill brings you back to your faction base.

Supplies spawn along with alerts at certain times.
● Supply items will be supplied in the following order: Heartening Flare, Fire Bomb, and Flare will spawn by order. Flare will not alert on the small map when spawning.
● Heartening Flare and Fire Bombs can be acquired 4 times each, and disappear in 2 minutes after spawning.
● Only 1 Flare will spawn per instance.
Heartening Flare
A bullet that strengthens allies around you.
●  Your allies’ armor and magic resistance increase by 30% for 2 minutes.
● The acquired Heartening Flare disappears upon death.
Fire Bomb
A bullet that deals great damage to enemies.
● Deals 50% of current health to hostile targets within a range.
● It has no effect on relics and targets around them.
● The acquired Fire Bomb disappears upon death.
Flare
Requests bombardment that deals great damage to enemy relics and automatic cannons.
● A None-Pirates Player with the Flare located in a certain area will activate a bombardment buff.
● A player can fire the Flare in the area and his or her location will be exposed.
● The Fire requires 20 seconds of preparation time.
● The flare can be put down or re-acquired, and can be re-acquired from fallen players.
Battle Rewards
When the battle ends, bonus points will be awarded according to the performance.