Greetings, Heroes of Erenor!
This is Yong-Jin Ham, Producer of ArcheAge at XLGAMES.
This is my first message since the expansion of the Asian region service on February 25. Thanks to the expansion of the service that now includes Taiwan, as well as real-time transfer services that enabled existing Taiwanese players to move over to our game service, and the Southeast Asian players who continued to enjoy ArcheAge, the Asian region service has taken a great first step.
We will do our best so that the service is a more reliable one as we are able to listen to what the players have to say through our direct service.
Today, I would like to introduce to you the upcoming updates after the expansion of the Asian region service as well as update plans for the summer season. There are three main contents introduced in today’s message.
[Summary]
1. English & Traditional Chinese will be updated first in Asian Region
2. May 20th Update: Awaken Morpheus & Rangora
3. July Massive Update: New Skillset “Gunslinger” + New Weapon “Shotgun”
English and Traditional Chinese to be Updated First for Asian Region Service

As explained in the Developer’s Message in the announcement of the expansion of the Asian region last December, we have been searching for options such as updating the English language first to provide updates as quickly as possible. And we had to make a decision quickly, as our service has expanded to the Asian region and more players joined ArcheAge.

Therefore, we decided that it would be best for the game service to introduce English and Traditional Chinese languages for the contents added for the upcoming May update onwards first. Thai & Bahasa Indonesian languages will be updated within a month or two. This will be applied from the May update, and there will be no changes to the previously-added contents.

We will strive to provide various contents of ArcheAge to the Asian region service as soon as possible. We highly appreciate your understanding in this matter in advance.
May Update
I am sure Morpheus and Rangora are the two most notorious raid bosses that you have encountered countless times. This is why players have so much interest in their stories, and in this update, their stories will be provided as chronicle quests along with the two bosses becoming stronger in this update.
You can acquire enhanced rewards when you defeat the stronger Morpheus and Rangora. As many players expect, Anguish and Pledge items can be awakened to grade 3 upon update.
As residents of the Nuia and Haranya continents, a lot of activities are available from community centers. In contrast, the housing environment in Auroria was rough and barren as it is less developed. In the May update, the housing province and outpost will be added in Auroria. You can use facilities in the Auroria outpost for various Auroria exploration and production activities. More quests from outpost are available in accordance with the development rank. Housing province will be updated first in Nui and Tahyang server and updated later in Gene server.

- Rank 1 Development: Resident quests and basic folio available.
- Rank 2 Development: Naval specialty packs crafting available.
- Rank 3 Development: Buff effect, which is one stage lower than the strength of the faction from the outpost; additional resident quests will also become available.
With the update, you can now engage in trade activities in Auroria, such as processing materials produced from Auroria to crafting and selling specialties. The process of how cargos are made via Auroria trade is the same as the current continents’ trade system. Furthermore, please note that a trade outlet, where you can sell specialties and make cargos, will be added in Heedmar. However, the trade outlets where you can sell specialties made from continents will stay in Diamond Shores.

Cargos made from Auroria can be sold at the trade outlets in Two Crowns and Solis Headlands for Onyx Archeum Essence, or cargos can be sold at Freedich Island for Dragon Essence Stabilizer. Trading in Auroria has a higher risk than trading in continents. Therefore, more rewards will be given.

It will be a good idea to scout the housing province in Auroria before the update.
- Removal of Housing Province Protection

Wardrobe - Image Slot will be updated to allow the wardrobe, an image item, to be equipped or removed at no cost or step. With the update, it is now possible to change the appearance freely and conveniently using various wardrobes while maintaining the stat of the wardrobe. Please check the patch note for more information.
You will be able to register the aquafarm at the Farm feature of the farmhands. You can request the production at Farmhand with aquafarm. However, it is separated from existing farms. Farmhand can produce naval plantings as much as the capacity of aquafarm. Likewise, only land plantings can be produced as much as the capacity of farms. 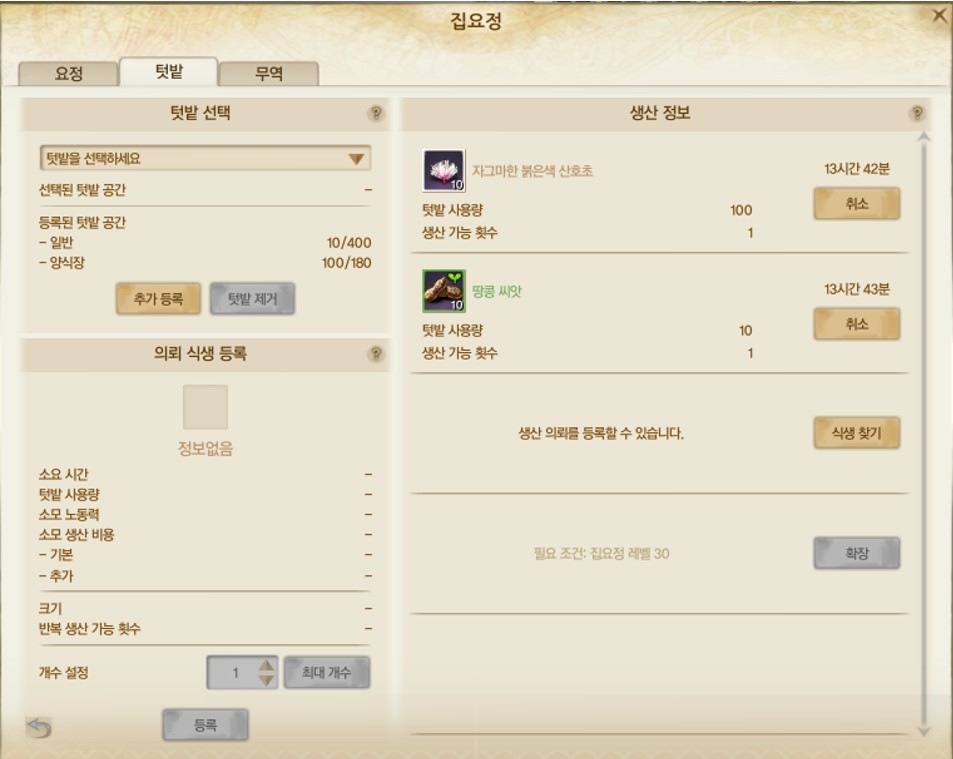 (Picture) Producing plantings after registering aquafarm at farmhands
In addition, look forward to the addition of Eastern Hiram Mountains, higher-grade equipment, and more character creation slots on May 20th for the Gene server.

July: Gunslinger Update
In early July, there will be a massive update with a new skillset, Gunslinger, to keep our previous promise to provide quick updates. The new skillset, [Gunslinger], symbolizes Morpheus and it is a medium/long-range skillset that uses a shotgun. Gunslinger is characterized by a colorful and powerful hit impact. You can use most Archery and Gunslinger skills regardless of ranged weapons such as bow and shotgun. However, like Swiftblade, a skill effect is applied differently according to the weapon used.

All types and stages of shotguns are added as there are no skill restrictions by an equipped weapon. 63 types of shotguns such as Hiram, raid, dungeon, craft, etc. will be added in this update, and all upgrade processes are applied the same for each type(synthesis materials, awakening scrolls, etc.). As there are various appearances of shotguns, I assume it will be fun to look for a shotgun that suits your taste.
Please refer to the images below for shotguns we are preparing.

As our service is provided in various regions, there are concerns within the dev. studio regarding localized services due to language barriers and cultural differences. I sincerely thank the players for trusting in us and playing the game. In the second half of the year, we are preparing another massive update following the new skillset update. This future update will first be introduced in Korea during summer and then in the Asian region in the 2nd half of the year.
Recently, we received a complimentary letter from a player who plays in Asian region service via the community. Our team will put full effort into development of contents so that you can enjoy various battles and vocation contents which is the characteristic of ArcheAge.

In addition, please be acknowledged that we are continuously monitoring usages of illegal programs. We will use our best endeavors to make ArcheAge a “clean and fair” service by taking proactive measures against users of such illegal programs.

Once again, thank you for your support to the Asian Region service and see you in the following message.