Hello Heroes of Erenor!
We present to you our Event:
Naval Arena: Stillwater Gulf Season 3
Check out the Details below:
♣ Event Name:
Naval Arena: Stillwater Gulf Season 3
♣ Event Duration
After June 17, 2021 Maintenance - Before July 8, 2021 Maintenance
♣ Requirements
Match Duration: 60 mins
Level: 30 and above
There is no Equipment Point Limit
Entry time: Everyday from 16:00 – 1:00 (UTC+8)

♣ Event Details
Introduction to Naval Arena
- This is a battle royal. All combatants are fought until only ten of them remain floating in Naval Battle: Stillwater Gulf. Defeat everyone you encounter to win the game.
- Naval Battle participants must summon Battle Clipper to survive. Once the Clipper is boarded, it cannot be abandoned until the bitter end.
- Make sure to be close to Ezi's Divine Protection when the Grudge Veil moves in.
- Exploring the map and defeating monsters allows the participants to find supplies, which then can be used to enhance their Clippers.
- The Arena ends in 60 minutes, but the Grudge Veil quickly closes and threatens you.
- Spirits in the gulf prohibit all communications in Naval Battle: Stillwater Gulf.
- Participants will fight under the same conditions. Beware, entering the arena will cancel all active buffs/debuffs and these will not be recovered even when you leave the arena.
Basic Information
Naval Battle: Stillwater Gulf is a seasonal marine survival Arena with up to 50 players and held at certain period of time

How to Join
- When the Instance is available, the system displays the event banner on the upper right corner, and you can open the instance window immediately by clicking the banner. 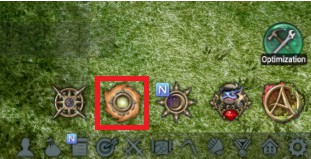 - Anyone with level 30 or higher can apply for entry through Instance> Arena (shortcut Shift-;) on the bottom of the game screen when the arena is playable.
- Debuffs such as forcibly awaiting Trial, participation in the Trial, prisoned, or carrying a Trade Pack will prevent you from joining the arena.
- You can still enter the Instance even if your Entry Limit has run out.
- You cannot obtain a reward if your Entry Limit count runs out, but the result will still be reflected on the ranking information.
- You can reset your Entry Limit when it runs out. 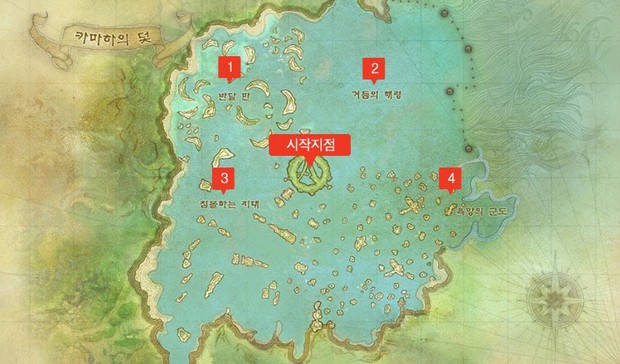 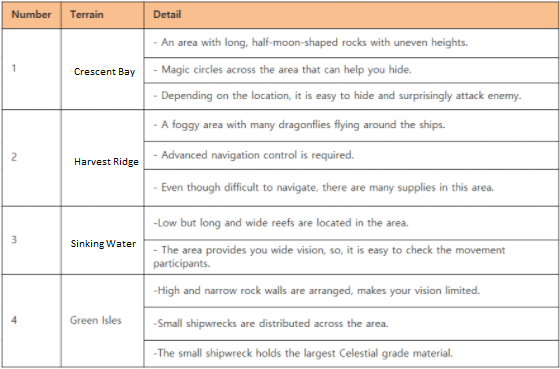 - Large shipwrecks are scattered throughout the area.
> Large shipwrecks will give you supplies
Arena Composition: Supplies
- When you acquire Supplies, you can acquire various effects and consumables that help you play.
- Supplies consist of 4 grades: Basic / Grand / Celestial / Legendary and how to acquire and its effect may differ per grade.
- Supplies can be differentiated by its color. You can acquire XP for your Clipper and choose Special Skills.
Supplies
- Acquire 100 Ships XP
- Able to acquire large amounts of general Supplies around the ship using the ship's skills

- A supply that can rarely be found.
- This might grant you unexpected luck upon.

Special Skills Enhancement
6 types of special skills are available on the Arena, and only one can be obtained at the same time.
Special skills can be acquired and changed through supplies.
Special skills effect will get stronger as the Clipper Skills level increases. 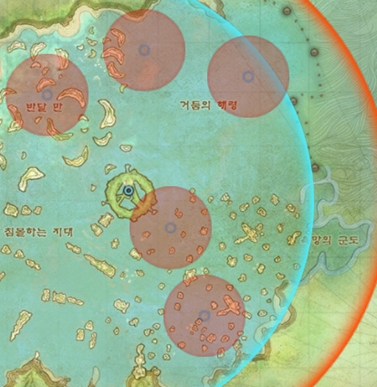 - It deals damage proportional to the boat's health.
- The longer you stay, the closer you get to death. Escape as soon as possible.
Twister

- It is stronger than the one in the Gathering Seahag.
- It does not deal any damage but these obstacles may come your way.
Fireball 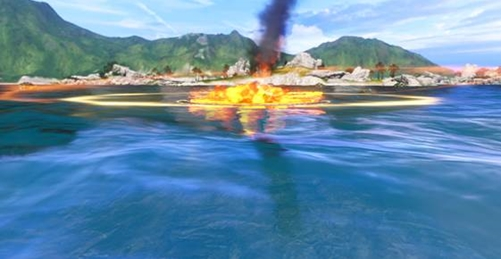 - It is a fireball falling from the sky.
- Each fireball is strong enough to destroy the clipper..
Tracking Progress 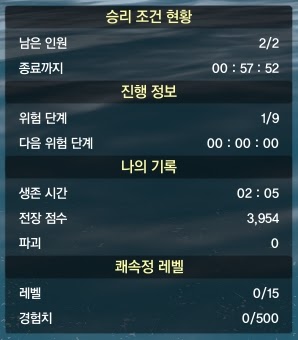 - You can check your record and the next Grudge Veil approaching in the Arena.

How to Level Up
- XP Points for Battle Clipper’s growth can be obtained through Salvage Supplies. XP Points obtained vary depending on the Supply’s grade.
> Lucky Supplies do not provide XP Points.

Install Trap
- Installs a trap material that explodes when opened at the rear of the clipper.
- The higher the Clipper Skills level, the more the trap’s material appearance changes and the explosion damage increases.

Guided Torpedo
- Fires a torpedo that chases nearby targets.
- The higher the Clippers Skills level, the higher the number of shots.

Lightning Strike
- Strikes lightning 5 times in a random area nearby.
- The higher the Clippers Skills level, the more the lightning strikes.

Caramelizing
- Fires flames in both directions of the hull.
- The higher the Clippers Skills level, the higher the damage.

Trap
- Beware of falling into a trap while collecting supplies.
- Being caught in a trap causing your location to be exposed to all players in the arena.
- Killing a trapped player will give you Legendary Supplies.

Death will not decrease Experience/Durability in the Arena.
You will be defeated upon death and can leave the arena.
Victory Condition

- Last 10 Floating will be the winners
Rules

- The Hereafter Stone and some items are restricted.
- Mounts, Battle Pets, Steamtank, machining Devices are allowed.
- Only clippers summoned in the Arena can be used.
Arena Reward
Participation Reward
- Kyrios Badge will be distributed according to the rank after the arena.
- 5 Kyrios Badges will be given for every Clipper you destroyed.
- Rewards will be sent out to your Mailbox.

- Ranking Calculation: At midnight on the last day of the month of the season (00:00)
- Characters who scored 4000 or less are not included in the ranking.

- Naval Executioners and Bloodsalt Bay Figurehead Crate will expire in 3 days after mail is sent if you don’t open the crate.
List