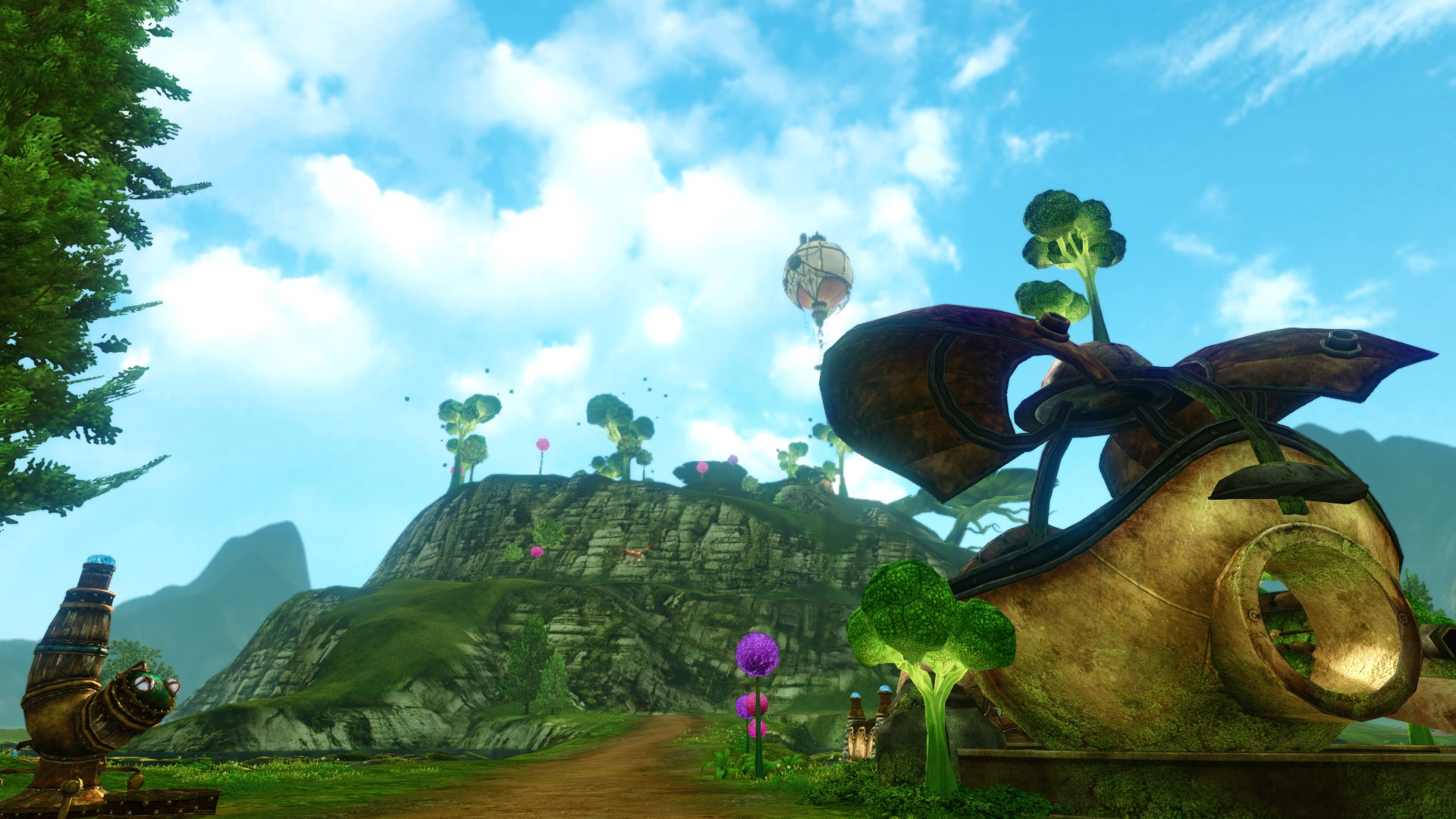 Daru, who worship Iphnya as god, live in Ahnimar to protect Ipnysh’s seal that binds Akasch.
One day, a god with wings appeared in Daru priest Agaruru’s dream and tasked him with finding an apostle who inherits the power of Iphnya. Even no one can say whether this dream was a divine message or not, every Daru believe that it was. Hence Daru tried to find the apostle for hundreds of years secretly but failed.
Now Daru priests decided to hold a festival to invite people over. They believe they can recognize the apostle if he visits the festival.
♣ Basic Information
- This event can be participated in during the Daru Festival.
Festival Area 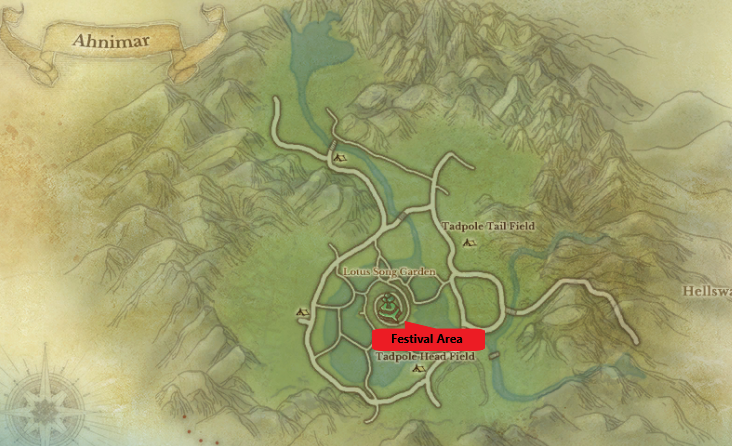 - Ahnimar is a peace zone.
- Worldgates can be used to visit the festival site.
> The worldgates are located in Marianople, Austera's Headquarters, and Diamond Shores.
♣ Quest Progress Information 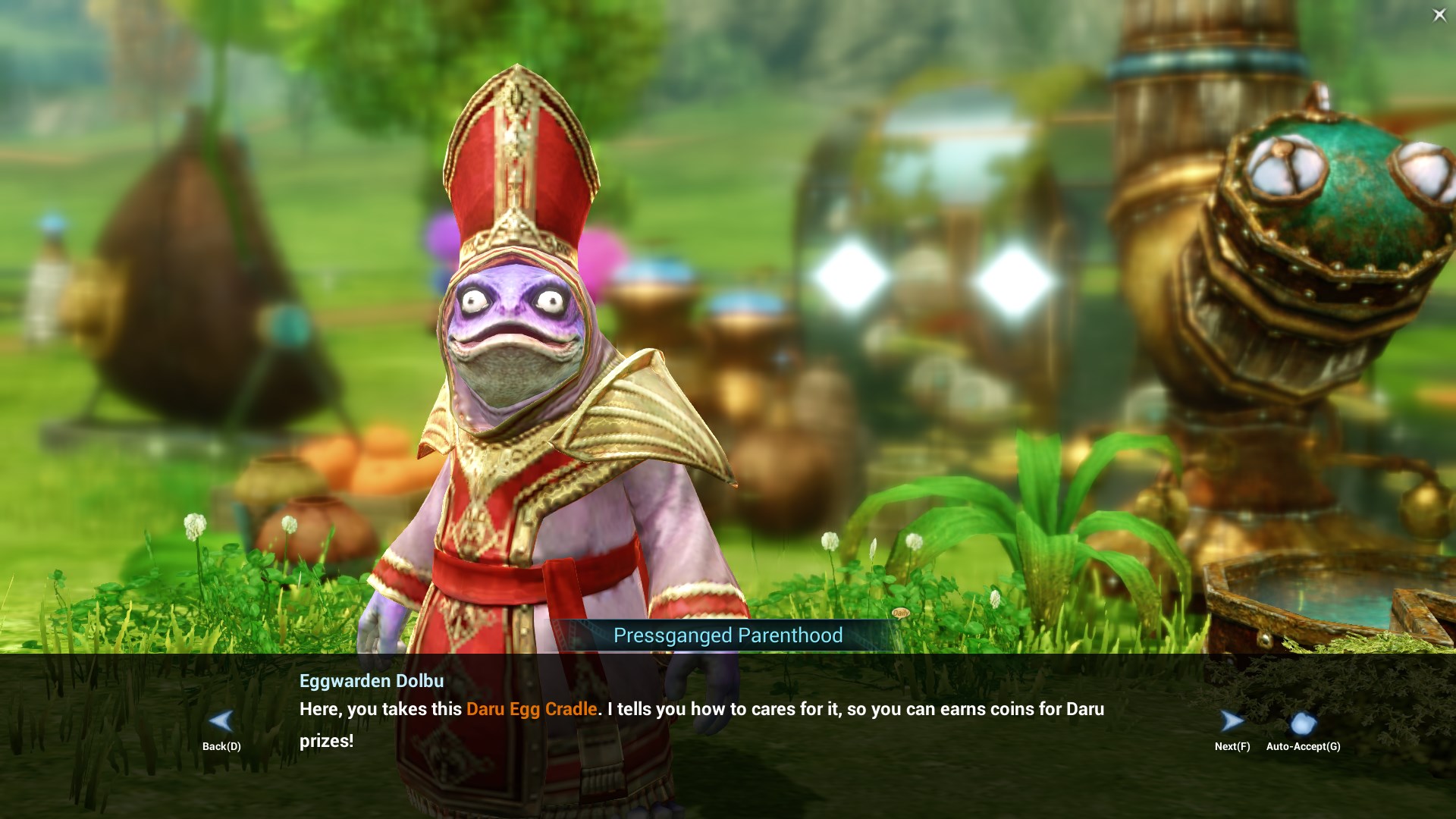 NPC Quest: Eggwarden Dolbu
“We Daru is only layings our eggs once a year. So we has LOTS of eggs to take care of when it happens. So every year, we rewards friends of Daru who comes and helps us look after them. Is like… big happy families, yes? We is all Daru durings the festival! Here, you takes this. I tells you how to cares for it, so you can earns coins for Daru prizes!” 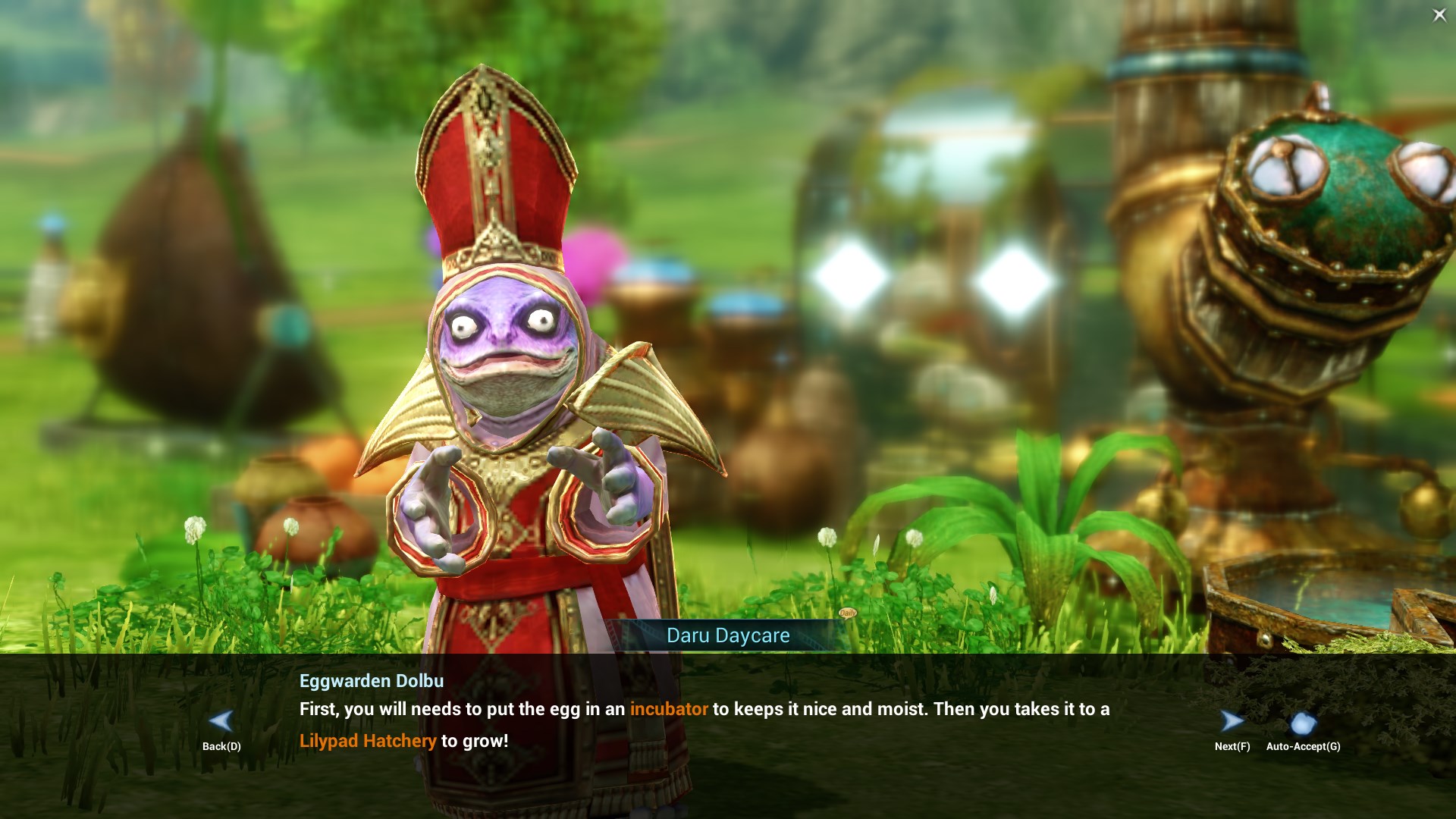 NPC Quest: Eggwarden Dolbu
"Daru Eggs is special--they can't talks like we cans, but they shares feelings with whoever stands near them!" 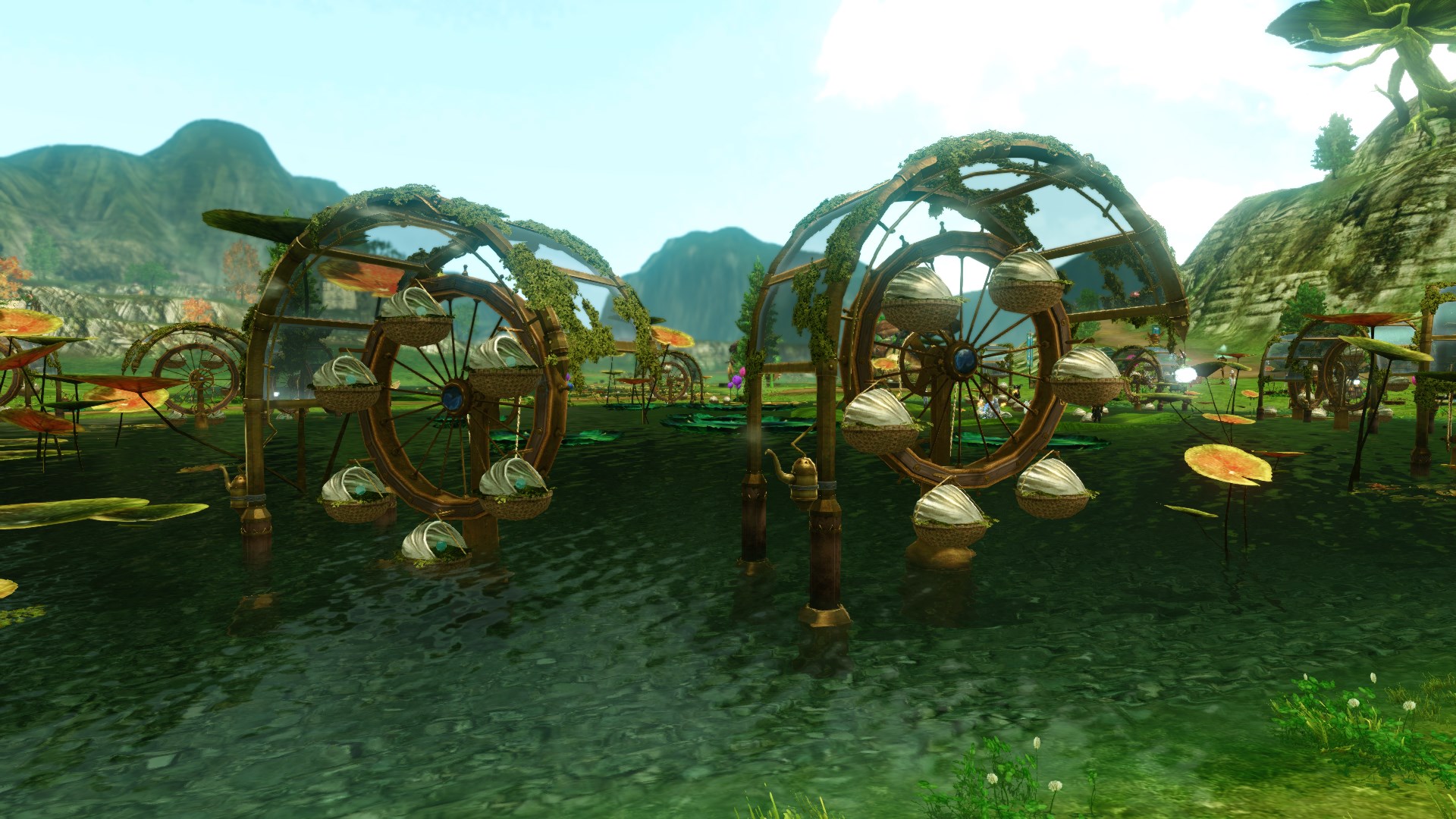 ※ The Egg disappears if left unattended for more than 10 hours. 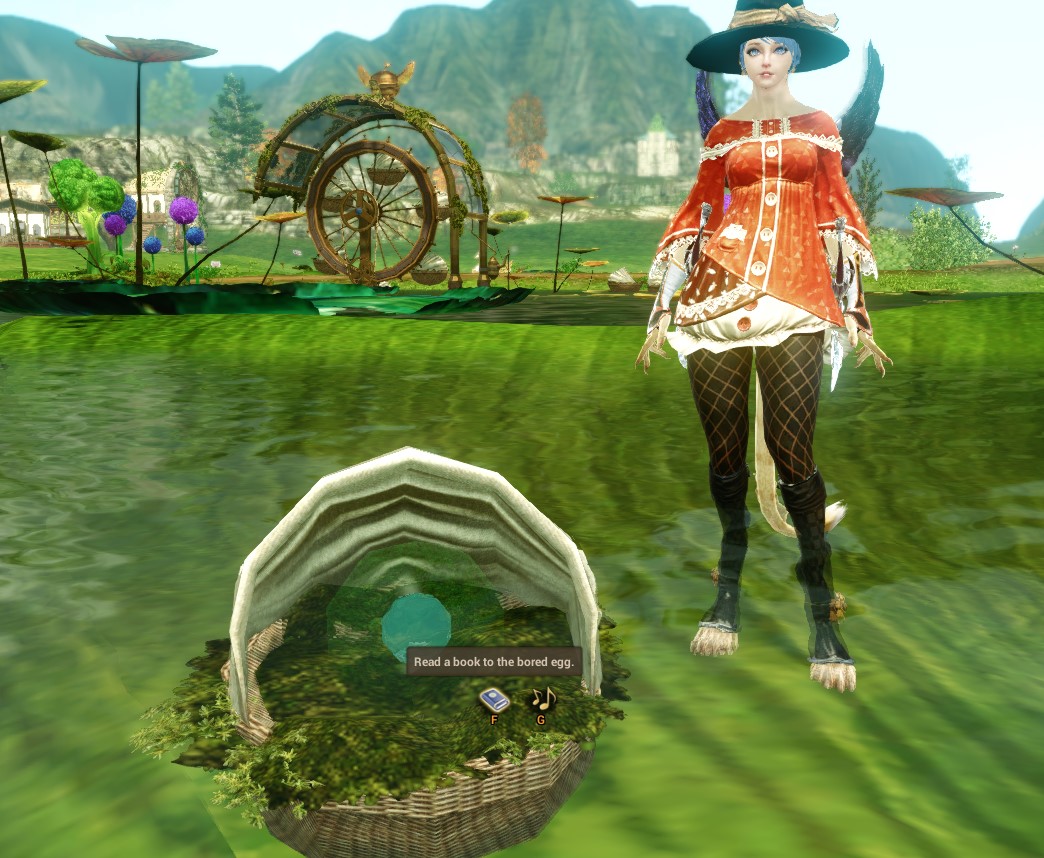 ▲ You can provide shade, read a book, or play music for the egg. 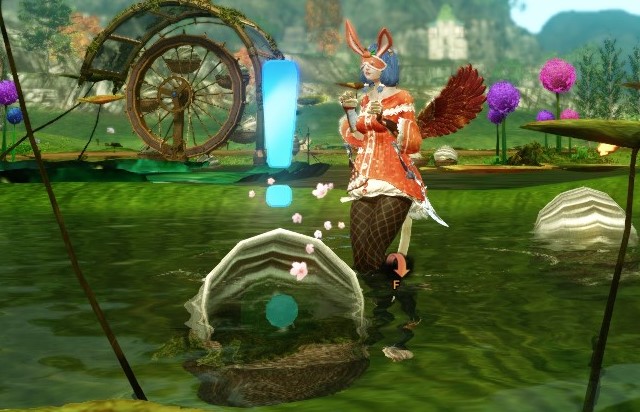 - 1 dari 5 Daru Egg below will be generated upon picking up the Hatching Daru Egg. 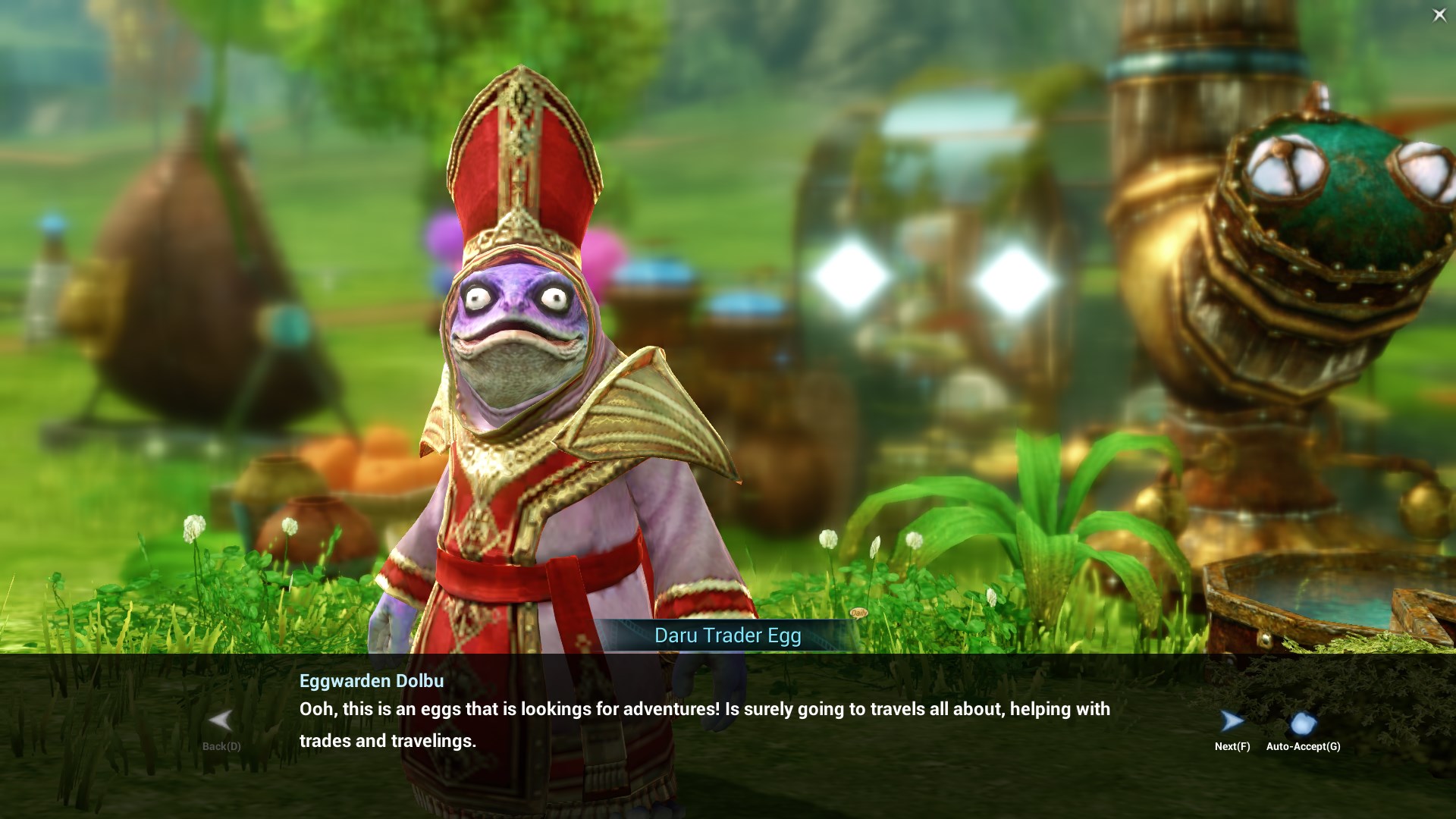 NPC Quest: Eggwarden Dolbu
- The quest can be received and completed according to the type of Hatching Daru Egg. 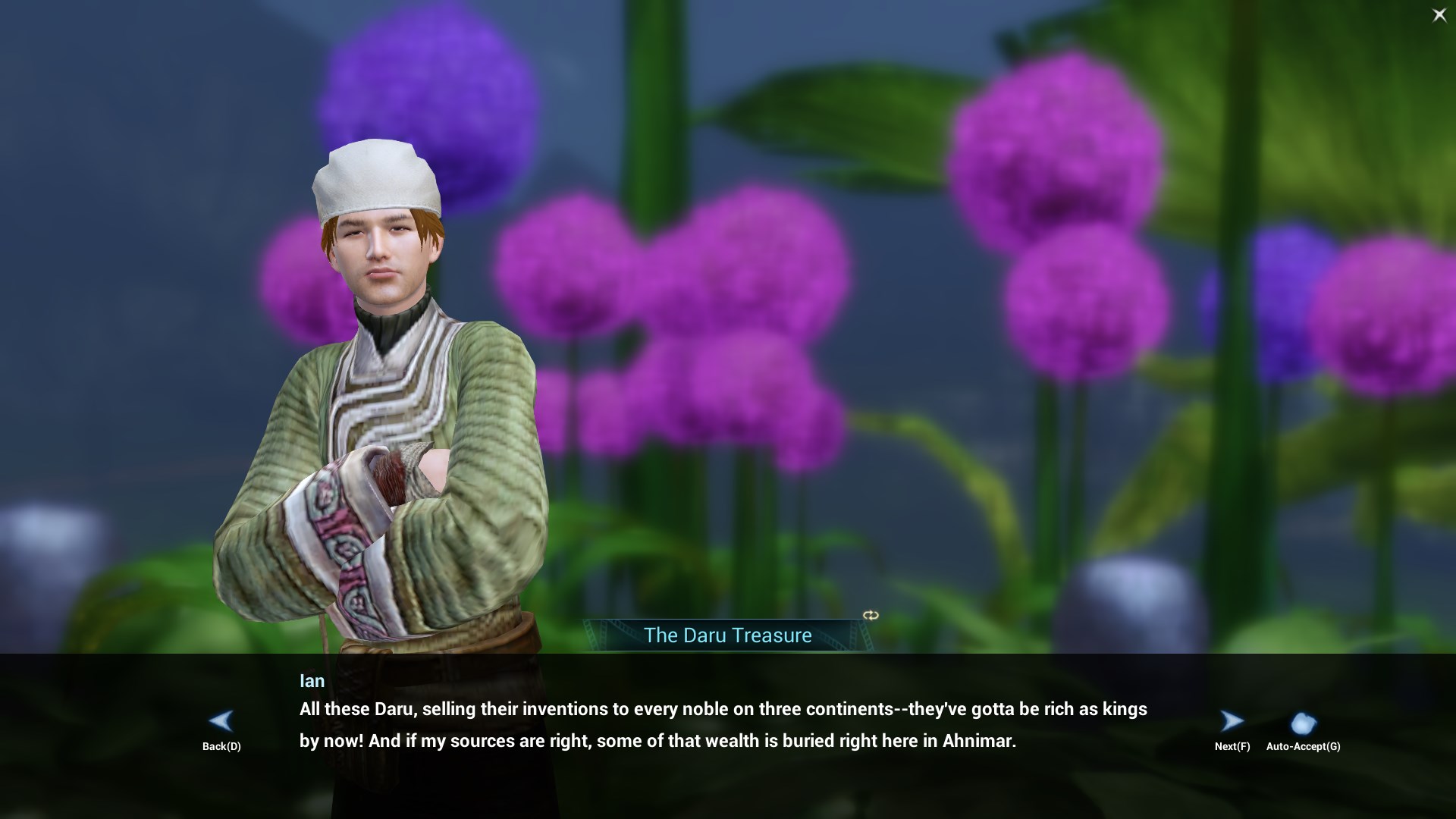 NPC Quest: Ian
“You here seeking the Daru treasure too? All these Daru, selling their inventions to every noble on three continents--they've gotta be rich as kings by now! And if my sources are right, some of that wealth is buried right here in Ahnimar. They say the treasure is under a rainbow that only shows up during the festival. So if you see the rainbow appear, dig as fast as you can! The treasure won't last long once it's uncovered!”

- Ian and the Ahnimar Rainbow appear at 2 pm, 7 pm, and 12 am UTC +8. (The hilltop of Lotus Song Garden in the center of Ahnimar)
- Sand piles can be found in front of Ian and where the rainbow ends. 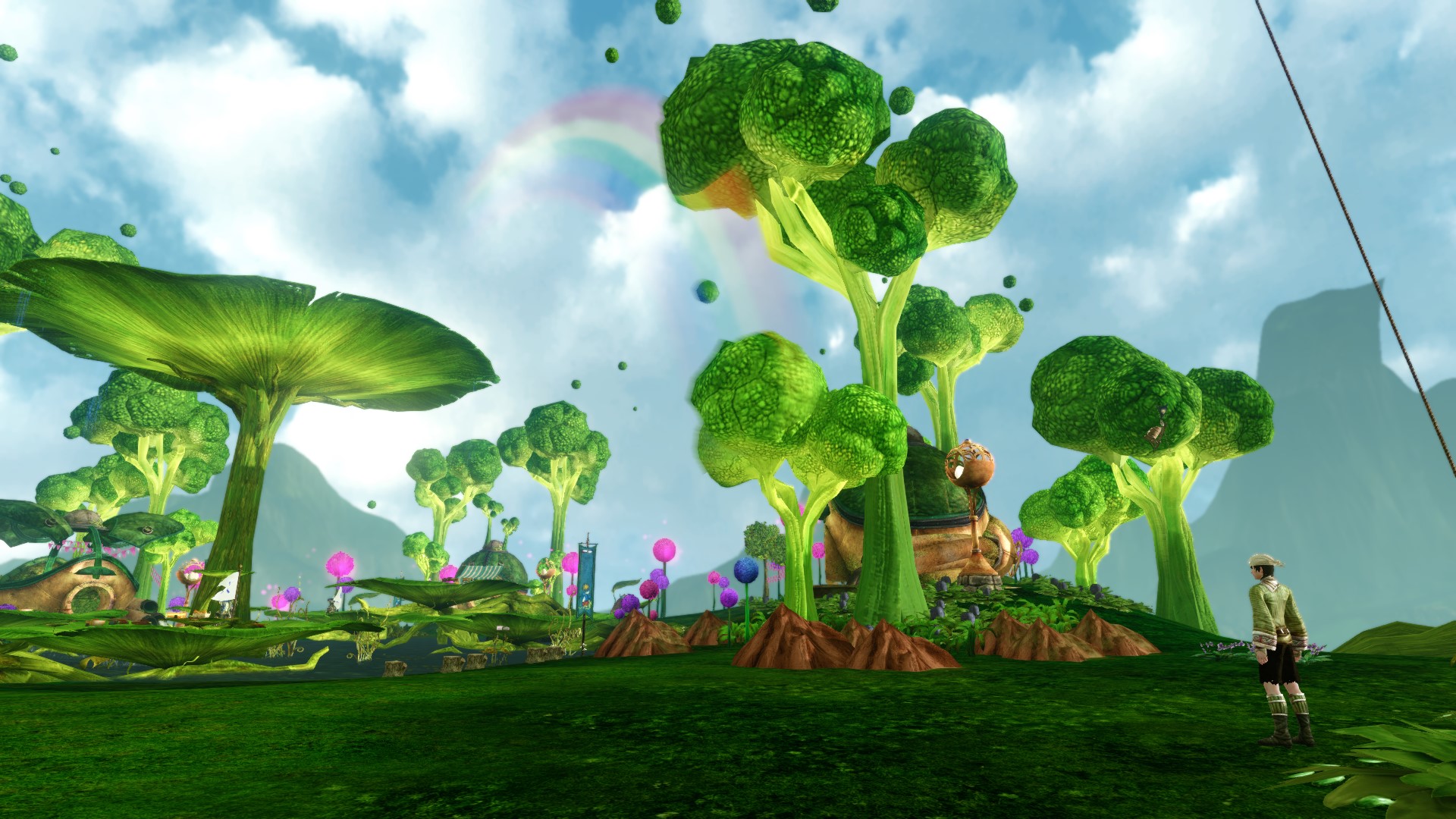 ▲ Brown sand piles can be found near Ian.

- Dig the ground to find a treasure around where the rainbow ends.

▲ Digging the ground does not require Labor.

- It is buried deep in the sand piles. Dig the ground with your friends.
- Dig up a treasure chest, see what’s inside, and it’s done! 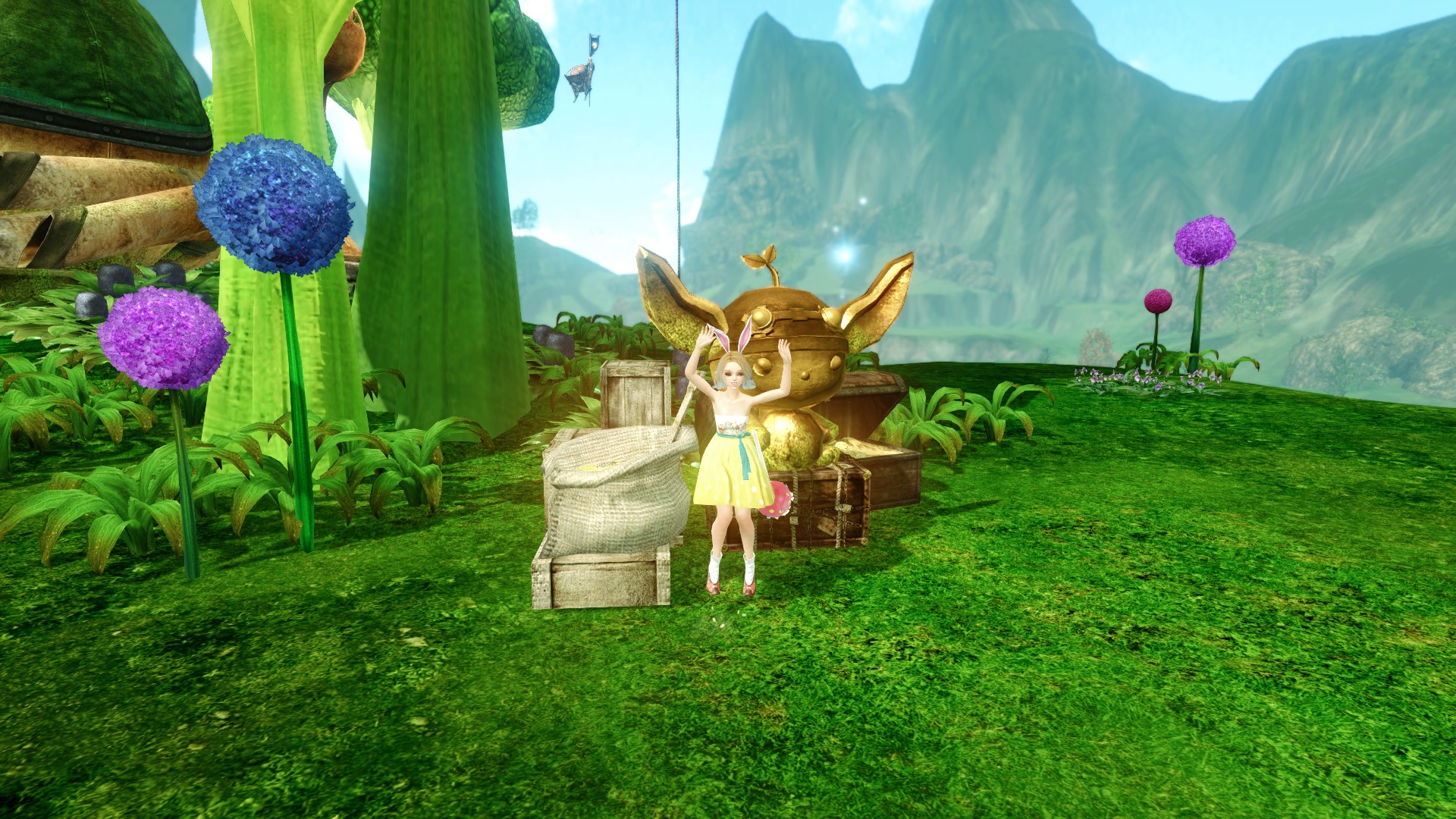 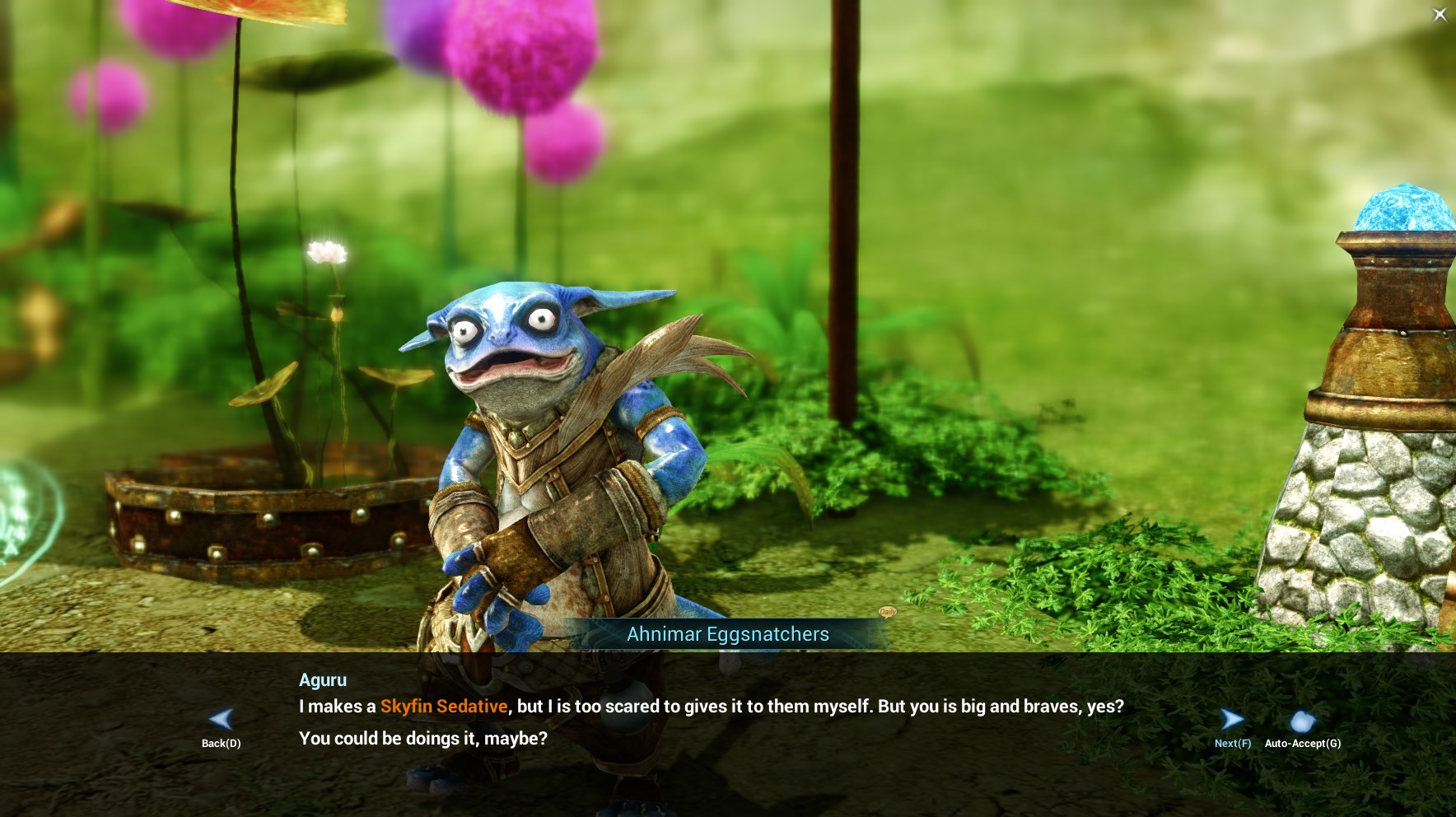 NPC Quest: Aguru
"There are too many Skyfins at the festivals. They always swarms at this time of year, because they wants to eats our eggses!   I makes a Skyfin Sedative, but I is too scared to gives it to them myself. But you is big and braves, yes? You could be doings it, maybe? Just walks up the path and gives the Skyfins this sedatives. It will makes them all loopy and dizziness, so they won't be able to eats our eggses. In exchange, I gives you coins for helping me, yes? Is good deal! You goes now, and tries not to get eaten.” 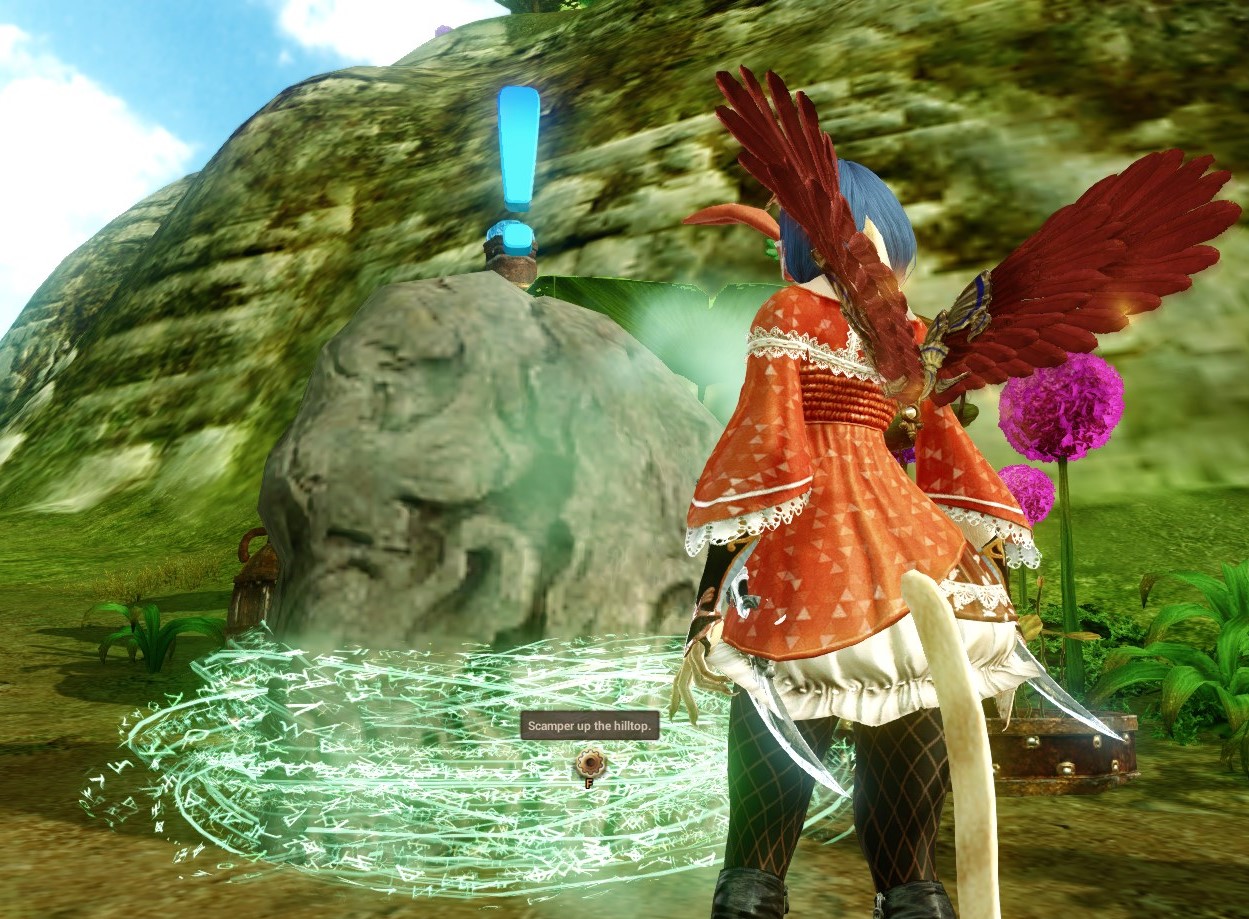 ▲ Use Garden Stone to climb the hill quickly.