Event Location
Enter Event Dungeon by clicking the ‘Instance’ menu (shortcut Shift-; ) at the bottom right of the screen. 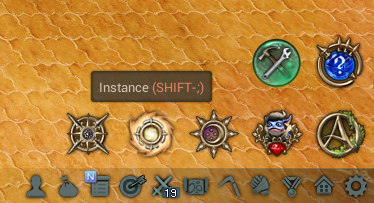 How to Participate
① During the event period, 'Please, Go Ahead' Event Dungeon is activated in the 'Instance' menu.
- Players over Lv50 can enter the Event Dungeon between 10:00AM ~ 23:50PM everyday.
- The arena type is Survival.
- There is no limit to allowed entries of the arena, but 'Dalgona Fragment' can be obtained only twice a day
by daily quests.
- Time limit: 6 minutes (Waiting time 1 minute + Actual playtime 4 minutes + Quest progression time 1 minute)
- 10 players are matched together.
② After entering the arena and 10 players are matched, players wait for 1minute to start the game
and each player gets a number.
- Message informing waiting status is projected.
- Random number in the range of 1 to 10 is activated over each player's head.
- Some players obtain 'Which Plank?' skill, and it could be found on character stamina UI or skill slot.
- Transparent barrier is generated during waiting time, and players cannot exit the event zone.
③ After 1 minute, the game starts, and you must reach the goal point in 5 minutes, stepping on safe
Reinforced Wood Plank.
- There are 32 wood planks in total, consisting of 16 Wood Planks and 16 Reinforced Wood Planks.
- Wood Plank destroys immediately when a player steps on it, and the player who stepped on it falls to the ground.
- The two types of wook planks are identical in shape, and they cannot be distinguished until some players use their
'Which Plank?' skill.
- Players cannot step on bars adjacent to wood planks; Players will fall to the ground if they try to get on the bars.
④ Players move forward stepping on the wood planks in designated order according to the world message.
- Players attempt to move forward in the order of 1 ~ 10.
- If #2 player is in progress, rest of the players can move but they cannot go further than #2 player.
(Player of current order must be in the lead.)
- 20 seconds is given initially, and surviving time renews by 20 seconds each time when the player steps on a
Reinforced Wood Plank.
- When surviving time is up, player gets shot by 'Sniper Worker' and falls to the ground.
⑤ By using special skill given to some of the players, players can get help finding out Reinforced Wood Plank.
- Which Plank? (Cooldown: 10 minutes) - Player carefully examines nearby wood planks. Reinforced Wood Plank
that does not break is shown for a while. (Purple effect)
⑥ Fallen player moves to the very bottom, and they may cheer for the others or wait for the game to be
finished and accomplish quests.
- Players cannot climb up once they are fallen to the ground.
- Players can freely chat and manipulate their characters.
- Daily participation quests are available if the character has stepped on any wood plank at least once.
- Quests are unavailable if the character exits the arena in the midtime.
⑦ 'Aren't You Lucky?' daily quest is available for players who reached the goal point.
- 'Piece of Cake!' buff is activated when the player character reaches the goal point.
- While 'Piece of Cake!' buff is activated, players can proceed to 'Aren't You Lucky?' quest.
- The quest is automatically completed when the quest is accepted, and 2 Dalgona Crates can be obtained
as a reward.
Quest
Daily Participation Quests
1. The quests can be accepted while 'Step-by-Step' buff (obtained when stepping on a wood plank) is activated.
2. The quests can be accepted from 'Event Worker' NPC and they are for over Lv50 players.
2-1. Accept and complete 'Challenge After Challenge' quest.
2-2. Accept and complete 'Unmatched Courage' quest.
(Can be accepted after completing 'Challenge After Challenge' quest and participate in the arena for the second time)
※ The quests can be completed if properly played in the arena. (Rewards can be obtained twice a day)
Daily Completion Quest
1. The quest can be accepted while 'Piece of Cake!' buff (obtained when reaching the goal point).
2. The quest can be accepted from 'Event Worker' NPC and it is for over Lv50 players.
Accept and complete 'Aren't You Lucky?' quest.
(Can be accepted after completing participation quests)
[Dalgona Crate lets you choose from 4 types of Dalgona; You can obtain different items at different chances.]
Obtainable items other than gold from the reward

Achievements
5 new achievements and titles can be acquired by accomplishing goals.